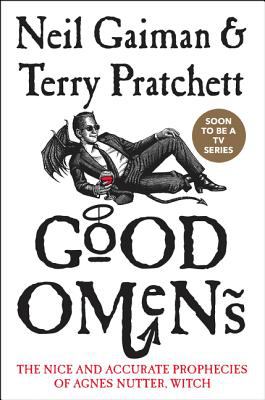 Over the summer, Amazon Prime released the first season of Good Omens starring Michael Sheen and David Tennant. Those are two of my favorite actors, so I knew I wanted to watch the show. Digging into the background of the show, I realized that it was based on the book by Neil Gaiman and Terry Pratchett that was originally published in May 1990. Wanting to read it, but knowing that I enjoy Gaiman’s books more as audiobooks, I decided to find a copy and give it a listen. The narrators for Good Omens caught my interest from the beginning and honestly kept me coming back for me. The premise was also one I had not encountered before, so I wanted to see how it would end.

Good Omens by Gaiman and Pratchett dictates the nice and accurate prophecies of Agnes Nutter, witch. You see Agnes Nutter is the author of the world’s only completely accurate book of prophecies, which she wrote in 1655 and completed before she exploded. Yes you read that right: Agnes exploded. These prophecies may be accurate, but it’s proving difficult for Agnes’ descendants to figure out just what Agnes meant in all of them. After all, she had to use 1600’s language to describe current events and activities and items. It doesn’t always make a lot of sense. Anyway, Agnes’ descendants are busy trying to decipher her prophecies and see that the world is going to end next Saturday just before tea. Oh boy. And it’s going to be a fiery end. Just what they need.

Years before the scheduled apocalypse, an angel and a demon were tasked with bringing the Antichrist to Earth as a baby and placing him with a pre-determined family. This fussy angel and speed-loving demon have been around since The Beginning and aren’t exactly looking forward to having to start all over again with the coming Rapture. As the date rapidly approaches, armies of Good and Evil begin arriving on Earth, frogs fall from the skies, Atlantis rises from the seas, and tempers on both sides flare. Things are rapidly coming to a head when the Four Motorcyclists of the Apocalypse show up to take on the Witchfinder’s army and the two are left to find a way to stop the apocalypse from actually happening, since they like the way they are living right now thank you very much. There’s only a slight problem. Someone has misplaced the Antichrist. He’s not where he’s supposed to be and hasn’t been since he was brought to Earth. Oh bother.

If you don’t have Amazon Prime, the Davenport Public Library owns a DVD copy of Good Omens for you to check out!