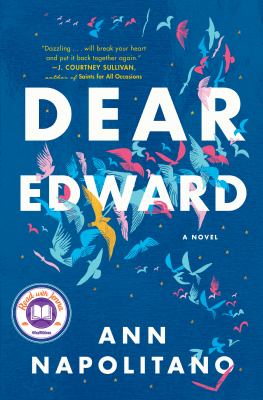 What do you do when, in an instant, your entire world changes? Your family, your planned future, your past all now belong in the “before” while you alone must move into the unknown “after”. And what is your duty to what is lost? How do you remember and honor them?  This is the dilemma that Edward Adler must face in Dear Edward by Ann Napolitano.

Twelve-year-old Eddie Adler and his beloved older brother Jordan are moving to Los Angeles with their parents for their Mom’s new job. The family boards a plane in Newark and, with the rest of the passengers, settle in for a six-hour flight. The trip is pretty ordinary with it’s random collection of personalities, each with their own unique stories – a soldier about to leave the service, a Wall Street whiz kid, a young woman who’s just found out that she’s pregnant, an exuberant woman leaving her husband to start a new life, a wealthy man seeking medical treatment in California. Casual connections are made between people on a shared journey,  but all thinking ahead to what awaits them in Los Angeles.

Then, somewhere over Colorado, something goes horribly wrong and all those futures come to an end. The plane crashes killing 191 people. There is only one survivor: Eddie Adler.

Edward (he now goes by Edward; Eddie belongs to the “before”) goes to live with his aunt and uncle when he has recovered from his injuries. Here he meets their neighbor Shay who becomes a rock of normalcy in his suddenly upside down world. It’s when, a couple years later they discover that Edward’s uncle has kept the hundreds of letters that were sent after the crash that Edward begins to first question and then put into action how to shape his life moving forward.

This is a moving, thoughtful book that explores that you shouldn’t take your life for granted and to live with purpose. It is often melancholy – sections alternate between the stories of the people on the plane and with Edward’s struggles after the crash – so many hopes and plans and dreams gone in an instant. But it is also restorative, that these lives weren’t wasted and that Edward is able to move on without abandoning the past, that you carry their memories and stories with you and their lives continue through you and your actions. A lovely, uplifting novel.