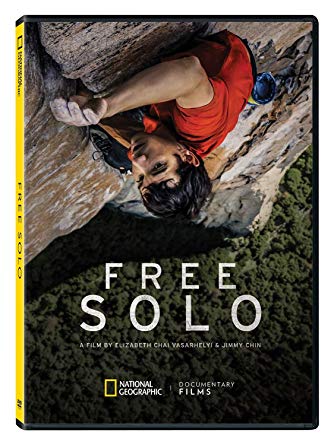 Imagine clinging to the sheer side of a mountain, no ropes, no superpowers, no safety harness. One slip and you will fall to your death. Now imagine going climbing this way – on purpose! People do – they are called free climbers and they climb mountains using only the strength of their hands and the agility of their feet.

Free Solo, which won an Oscar earlier this year for Best Documentary Feature, follows one of the best free climbers in the world, Alex Honnold, as he attempts to climb what has long been considered unclimbable – the sheer, 3000 foot wall of El Capitan in Yosemite National Park. Filmmakers Jimmy Chin and E. Chai Vassarhelyi knew the route that Honnold would be taking and were able to set up cameras along the way in advance and as unobtrusively as possible. Tension mounts as Honnold debates when to go (good weather is critical), trains for the most difficult sections and confers with other free climbers.  However, it is Honnold’s decision alone on when to climb and very early one morning, he slips away and, without fanfare, begins to climb.

The climb itself is harrowing to watch. The documentary goes into some depth about free climbing and what makes El Capitan so difficult. Judicious use of drone footage (the filmmakers were very concerned about not creating a distraction while Honnold is climbing) gives the viewer a clue to the immensity of this task. There is only one alternative if Honnold misses a step, or chooses the wrong foothold and that is dying.

Free Solo also reveals some of Honnold’s lifestyle and personality. He himself claims in the documentary that he is probably somewhere on the Asperberger’s spectrum. His demeanor is quiet and withdrawn, nearly emotionless. When asked if he worries about the dangers (many free solo climbers have died while climbing) of his sport, he shrugs and says that he accepts this and seems unconcerned about how any friends or family he would leave behind might feel. He is, in many ways, not terribly likable, but his skill and focus are admirable.

Beautifully produced by National Geographic, Free Solo will give you a thrill ride without the threat of dying.