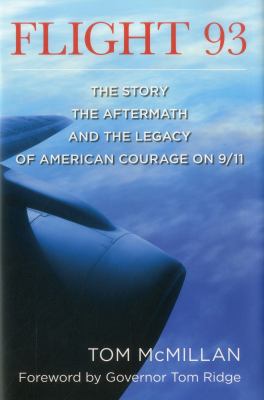 United Airlines Flight 93, which took off from Newark Airport the morning of September 11th, 2001, is perhaps the most famous flight in modern American history: We know of the passenger uprising, but there’s so much more to the story besides its harrowing and oft-told climax. Amazingly, the definitive account of this seminal event has yet to be written.

Flight 93 : the Story, the Aftermath and the Legacy of American Courage on 9/11 offers the most complete account of what actually took place aboard the airplane – from its delayed takeoff in Newark to the moment it plunged upside-down at 563 miles per hour into an open field in rural Somerset County, Pennsylvania. Flight 93 provides a riveting and complete narrative of the lead-up, event, and aftermath of the flight, based on interviews, oral histories, personal tours of the crash site and evidence recently made public. It examines the lead-up to that horrific morning; the stories of the victims who were launched into the center of history; the revolt that saved untold amounts of carnage on the ground and likely, the US Capitol; the eyewitnesses and first responders who rushed to the crash scene; the impact on family members; the effort to uncover evidence at the site; and the legacy the story leaves for future generations. (description from publisher)