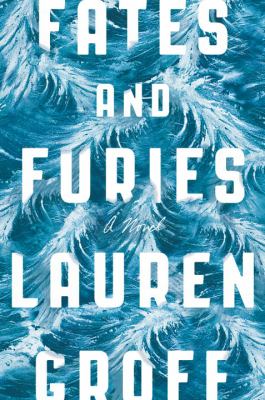 Fates and Furies by Lauren Groff has a gorgeous cover. I have been wanting to read this book since it came out because I wanted to figure out if the blue on the cover was supposed to be waves or feathers. (It’s waves, guys!) I listened to this book through OverDrive and was very glad that I did. Fates and Furies is told from the point of view of two separate people and the audiobook has two separate people doing the narration! That allowed me to fully invest in each character’s life and imagine them more vividly. On to the explanation!

Fate and Furies tells the story of a marriage over twenty-four years. Lotto and Mathilde fell madly in love at the tender age of 22. At the very end of their senior year of college, Lotto spots Mathilde at a party, pushes through the crowd, falls to his knees and proposes marriage. She says yes on the spot. Two short weeks later, they’re married. Lotto and Mathilde are both glamorous and gorgeous people and separately are the envy of their friends. Put them together and their relationship is unstoppable. Lotto and Mathilde are destined for greatness. Years later, their friends are still in awe of their marriage, but through this book and the side conversations presented, we realize that their relationship has developed some intricate complexities that has twisted them. Lotto and Mathilde have grown over the years and their relationship has matured to encompass a number of layers that have mixed, mashed, and changed the foundation of their marriage and who they are as separate people.

This novel is told from the point of view of multiple people and flashes back to the past. These different viewpoints and histories allow readers to form a better understanding of Lotto and Mathilde as separate people and also as a whole. I enjoyed seeing Lotto and Mathilde’s dynamic change over the years. The examination of how both inside and outside factors can change a relationship was really insightful. The little and big truths and lies a person has can either make or break a relationship. Our past selves also influence how we present our current selves and then our future selves as well. Highly recommended.