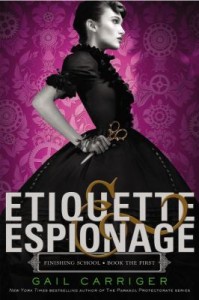 Once I devoured Gail Carriger’s excellent Parasol Protectorate series, I was delighted to see that Etiquette & Espionage represents her return to the same steampunk universe of  Soulless et al. It is also a first foray for Carriger into the field of YA. This is a true YA title – it’s perfect for, and I’d recommend it heartily to, almost any teenager/YA reader. It takes place at school; the main character is 14; the gore/sex/four-letter-words are tame or nonexistent. There’s a lot of emphasis on self-discovery, resourcefulness, learning, and intelligence, as well as bravery and friendship. The only element of a typical teen novel missing? ROMANCE!

In Carriger’s adult series, romance and sex were a huge driving force behind both the plot and the characters’ motivations. Without ever being crass or gratuitous, those books are about the way adults fall in love and stay in love – emotionally and physically. But in Etiquette & Espionage, the much, much younger teenage characters are motivated by entirely different things. Sophronia, the main character, is a “covert recruit” at a floating school for future spies; here, she’ll be trained to curtsy perfectly, measure poisons precisely, and wield sewing scissors to deadly ends. Sophronia is interested in boys, and she knows about feminine charms and how she might need to deploy them in her career as a spy, but her motivation is never reduced to the moronic, unimportant whine of “I want a boyfriend!! Why doesn’t a boy love me?!” – a fixture of many other YA titles. As the series goes on and Sophronia grows up, I fully expect Ms. Carriger to allow her to expand her romantic interests in a way that is intelligent and logical for her age, but in the meantime I’m thrilled to read a novel about the teenage experience outside of the desperate “need” for a boyfriend. Etiquette & Espionage is refreshing, exciting, and leaves the door open for a bevy of sequels that will be even better now that the groundwork has been laid.