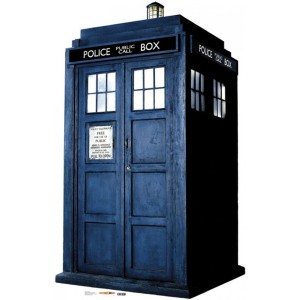 The big day is nearly here – Saturday is the 50th anniversary of the beloved cult-favorite Doctor Who television series! Following the adventures of a time-traveling alien known as The Doctor who travels through space in a 1960s-era blue police box (the TARDIS), the British production has gained an avid following in America  thanks first  to PBS and now BBC America. By turns thoughtful and irreverent, the show has been a huge influence on several generations of British (and now American) children, who remain lifelong and enthusiastic fans. Whether you’re a newbie just discovering the series, or have been following since the black-and-white era, the library has plenty of videos and books to help you celebrate the phenomenon that is Doctor Who.

Videos. The library has the complete range of the series that are available on DVD (not all of the series is on DVD and, famously, several early episodes have been “lost”) If you’re just starting out my advice is to begin with one of the Doctors when he first appears after regenerating (The Doctor can regenerate; his 12th reincarnation begins next year. You’ll get what this all means when you watch the show!) The most popular place to begin is with a Doctor from when the series rebooted in 2005, especially Ten (played by David Tennant) in series 2-4  or Eleven (played by Matt Smith) in series 5-7.

Guides. Don’t know a Cyberman from a Dalek? Confused by who came first, Donna or Martha? Wondering what, exactly, is a Pandorica?  The library has a large selection of guides available that will help you with the important and the minutia of the Doctor Who universe. Believe me, you’ll want to know what to do if confronted by a Weeping Angel! And be sure to check out Doctor Who: the Vault. Treasures from the Past Fifty Years for a great visual reference to all of the creatures, gadgets and characters from the series.

Books. Extend your Doctor Who experience with one of the many novels that picks up favorite characters and puts them in new and exciting situations. You’ll find them in both the Graphic Novels and in the Science Fiction section of the library.

Now you should be ready now for all things Whovian! Enjoy!