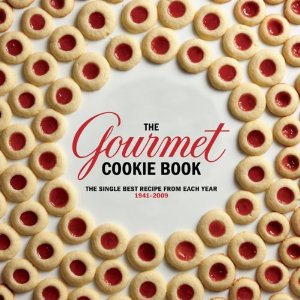 Here is almost 70 years of history one cookie at a time. The editors of Gourmet magazine (which recently ceased publication) went through their vast files of cookie recipes and chose one “best” cookie for each year, 1941-2009. The result is The Gourmet Cookie Book, a treasure trove not just of recipes, but as a reflection of our history.

Presented year by year, it is remarkably easy – and fun – to watch how recipes and baking have changed over the years. Early recipes are much more casual than what you may be used to now  with instructions like “bake in a moderate oven until done” or “add flour until stiff”, indicating that they assumed that the reader was an experienced cook;  more recent recipes give precise measurements and directions.

The style of recipes has also changed – early on, they are written in an almost conversational style, in paragraph form very different from the now standard list of ingredients followed by mixing instructions. Each recipe is presented as it originally appeared in the magazine but never fear – added notes take the guesswork out of anything that might be unclear.

It’s also interesting to track the trends and interests of the country through the years. The 40s reflect the lean years of wartime shortages and food rationing – cookies are simple and plain, using few ingredients. Recipes became more daring in the 60s with many international flavors, the 80s were the decade of chocolate and the 90s see the introduction of espresso as a regular ingredient. The look of cookies changes through time too, from simple shapes to colorful and complex. Yet they all hold one thing in common – they’ve all stood the test of time and they all taste great.

Bad Behavior has blocked 1614 access attempts in the last 7 days.