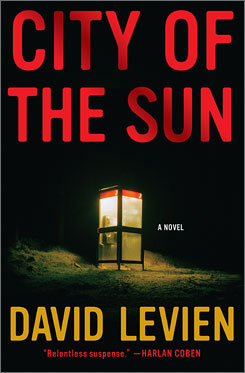 Although I enjoy James Patterson and Harlan Coben it’s nice to come across a solid suspense novel by someone else. City of the Sun grabs you from the beginning as 12 year old Jamie Gabriel disappears while on his morning paper route. We come to understand his parents desperation as month after month passes with one dead end after another. As all hope of finding Jamie is essentially lost, the Gabriels’ last plea for some closure comes from a former police officer turned private detective, Frank Behr. This colorful character adds his own tortured subplot to the story. We finally learn that Jamie’s disappearance is related to the youth slave trade. With renewed hope Frank and Jamie’s father track down the ring in Cuidad del Sol – the City of the Sun. The ending is climactic to say the least.

David Levien writes concisely yet allows you to feel the overwhelming emotions of the characters involved. The story is tense and exciting; well worth reading!