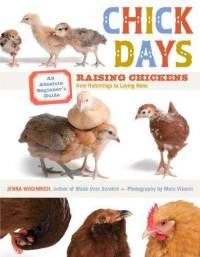 My Mother often tells stories about her father and the everyday adventures he had as a rural postal carrier during the Great Depression – the horse and wagon he used during the winter and when the roads were impassable, the cat they acquired because the cat hitched a ride in the mail truck one day, and how every spring he would deliver boxes of baby chicks, their busy peeps filling the truck – stories about events that now seem strange and distant to our modern world. In those days, raising chickens was commonplace both for eggs and for meat and nearly every farm – and many households in the small towns of Iowa – had a pen for chickens. As small farms and towns disappeared, so did the backyard pens and raising chickens became exotic and unusual. Thanks to the growing interest in eating local and fresh, chickens are cool again.

If you’re thinking about raising your own chickens, take a look at Chick Days: an Absolute Beginner’s Guide to Raising Chickens by Jenna Woginrich. You’ll learn a lot and have fun while you’re at it. Arranged scrapbook style with lots of photos and tips, Woginrich takes you through the first year of raising three chicks to laying hens. Along the way you’ll learn all kinds of trivia and practical information, all presented with humor and encouragement. There’s even a recipe (for quiche! not fried chicken!) These are fancy chickens that produce beautiful eggs and Woginrich makes no bones about the fact that these chickens are being raised as pets (although they’re also good egg producers) Even if you have no intention of adding chickens to your garden, you’ll have fun imagining the possibilities with this book.

Bad Behavior has blocked 1325 access attempts in the last 7 days.