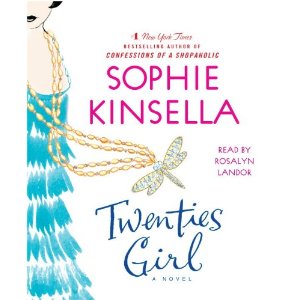 In addition to listening to an audiobook while on a long car ride, books on CD are a great way to pass the time while gardening or listening to while cleaning the house, or just about anything else!  One of my most recent discoveries is a great mystery with a hint of “chick lit,” Twenties Girl by Sophie Kinsella.

Young, London-based businesswoman Lara Lington has just learned that her 105-year old great-aunt has just passed away – an aunt that she did not even know.  While attending Sadie’s funeral, Lara hears voices and catches an occasional glimpse of a young woman dressed in 1920s attire.  She then realizes that the young woman is not an illusion but is actually the ghost of Sadie at age 23!  Sadie has decided to relentlessly haunt her grand-niece in order to nearly force Lara to help her find her most prized possession, a dazzling, diamond, dragonfly necklace that was stolen before she died.   The pair form an unlikely duo that argue, confide in each other and share a friendship in the most unlikely of ways – all while solving the mystery of the missing necklace.

Twenties Girl has a little bit for everyone -mystery, romance, intrigue and comedy.  A definite recommended read – you may find yourself  circling your block a few dozen times to find out how the book ends!

One thought on “Books on CD – Twenties Girl by Sophie Kinsella”

Bad Behavior has blocked 1420 access attempts in the last 7 days.