“They can’t make me be a princess…I mean, this is America for crying out loud.” 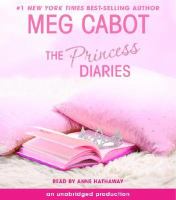 The Princess Diaries series by Meg Cabot is not only one of my favorite book series, but also one of my favorite audiobook series. In fact, I have only “read” the final two in the series–the first eight were purely experienced by audiobook! I seem to gravitate towards audiobooks where the story is in diary format (Princess Diaries, Bridget Jones, Confession of Georgia Nicholson, etc). They are usually light and funny, and I do not lose track of the story if I get distracted by something else for a second.

For those of you who haven’t seen the Princess Diaries’ movies starring Anne Hathaway (her first role, in fact!) and Julie Andrews, the series follows a girl named Mia Thermopolis as she deals with being invisible at school, having a crush on her best friend’s older brother, seeing her mom kiss her math teacher, and, oh yeah, finding out that she is the sole heir to the throne of a small European principality (the made-up country of Genovia). Mia is incredibly big-hearted and intelligent, but also quite dramatic and neurotic. Thus, she gets herself into all sorts of hilarious entanglements much to the enjoyment (and sympathy) of the listener. Also, almost everyone I know who has read this series has become infatuated with the character of Michael Moscovitz–as in he is right up there with Mr. Darcy for romantic literary figures. If that won’t get you to read/listen to it, I don’t know what will! (and extra bonus, the movies’ version of Michael was played Robert Schwartzman, who will be in the Quad Cities on August 6th to perform with his band Rooney at the Redstone Room.)