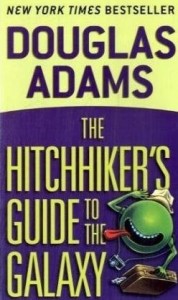 I love sci-fi and fantasy novels, and I have been meaning to read this classic sci-fi work for ages.  The Hitchhiker’s Guide to the Galaxy is the story of Arthur Dent, an Englishman rescued moments before the destruction of Earth with the help of Ford Prefect, his best friend who turns out to be from another planet.  As the title suggests, the two hitchhike through the galaxy in search of a mythical planet called Magrathea and meet new friends, including the President of the Galaxy, his girlfriend, and a depressed robot.  The book is absolutely hilarious.  The galaxy Adams has created is interesting and well-developed, and we get to learn a lot about it through random and laugh-out-loud details.  One of my favorite things about it is the encyclopedia that Ford is writing, which guides newbies like Arthur through the galaxy and defines all the different creatures, technological advances, and concepts.  If only our encyclopedias on Earth had Ford Prefect’s sense of humor! 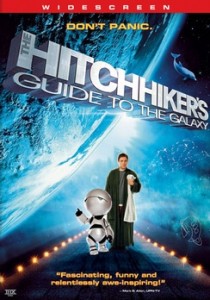 The movie version of The Hitchhiker’s Guide to the Galaxy stars Martin Freeman, Mos Def, Sam Rockwell, and Zooey Deschanel.  It follows pretty closely to the book and has great performances by Freeman as Arthur and the always amazing Alan Rickman as the voice of Martin.  However, I feel compelled to be honest and say that I didn’t really care for this movie.  I don’t know what it was about it, but something was just lost in the translation from book to movie.  For example, they did include narration of the encyclopedia entries, which I loved in the book.  But by the fifth or sixth little aside in the movie, I was pretty tired of the constant interruptions.  The book packed in all that detail without making it a laborious effort to get through, which is a feat that the movie didn’t accomplish in my opinion.  But then again, that’s just my opinion.  So if you liked the book as much as I did, I encourage you to check out the movie and see what you think!

One thought on “Book vs. DVD: The Hitchhiker’s Guide to the Galaxy”

Bad Behavior has blocked 1666 access attempts in the last 7 days.