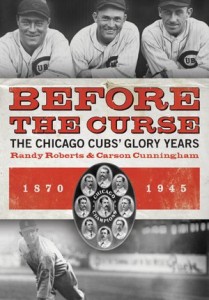 It’s Opening Day for Major League Baseball! We’ve got one more day before the Cubs start breaking our hearts (they open tomorrow at Wrigley Field against the Washington Nationals); here’s a reminder that the Cubs weren’t always the lovable losers.

Before the Curse: The Chicago Cubs’ Glory Years, 1870-1945 brings to life the early history of the much beloved and often heartbreaking Chicago Cubs. Originally called the Chicago White Stockings, the team immediately established itself as a powerhouse, winning the newly formed National Base Ball League’s inaugural pennant in 1876, repeating the feat in 1880 and 1881, and commanding the league in the decades to come.

The legendary days of the Cubs are recaptured here in more than two dozen vintage newspaper accounts and historical essays on the teams and the fans who loved them. The great games, pennant races, and series are all here, including the 1906 World Series between the Cubs and Chicago White Sox. Of course, Before the Curse remembers the hall-of-fame players  -Grover Cleveland Alexander, Gabby Hartnett, Roger Hornsby, Dizzy Dean – who delighted Cubs fans with their play on the field and their antics elsewhere. Through stimulating introductions to each article, Randy Roberts and Carson Cunningham demonstrate how changes in ownership affected the success of the team, who the teams’ major players were both on and off the field, and how regular fans, owners, players, journalists, and Chicagoans of the past talked and wrote about baseball. (description from the publisher)

Bad Behavior has blocked 1776 access attempts in the last 7 days.