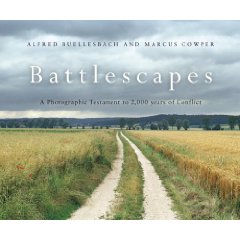 The scars on the landscape have faded, the roar of battle has been forgotten, and the machinations of generals and commanders and sacrifices of soldiers have slipped into the history books, but the places remain. Alfred Bullesbach set out to photograph the locations of 34 famous battles and the result is the stunning and thought-provoking Battlescapes.

Bullesbach is not a historian; he is a photographer and he approached each battlefield with a landscape photographers eye. In some cases, there are elaborate memorials or large formal cemataries; at other sites there is no evidence whatsoever that a battle took place there. Sheep graze on the grass covered trenches of the Somme where 1.5 million men lost their lives. A lush and peaceful forest stands were the Americans and Germans fought the bloody Battle of the Bulge.

Perhaps most poignant are the numerous sites from the Great War (World War I); men were buried where they fell, many of their names unknown. Small cemeteries, containing several dozen to just a few graves, have become part of the landscape, surrounded by farm fields and pastures. Each grave is still meticulously tended, with flowers and carefully mown grass.

All of the battlesites pictured are located in Europe, so Americans were only involved in the later wars (World Wars I and II), but you will have encountered many of the names in your history books – Alesia, Hastings, Agincourt, Blenheim, Waterloo. The photography is stunning with large panoramics and as well as more intimate studies for each location. A guide to visiting the battlefields concludes the book.

Bad Behavior has blocked 1624 access attempts in the last 7 days.