Baseball’s back which means summer can’t be far behind! While some say that baseball is no longer America’s favorite sport, it’s still an integral part of the American character. This week we’re going to celebrate a favorite combination  – baseball at the movies. Lynn gets us started with a smart and funny film set in the minor leagues. 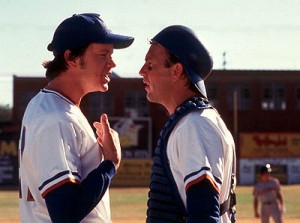 My favorite baseball movie is Bull Durham. Like the Quad City River Bandits, the Durham Bulls is a minor league team, with a charming baseball park.

Much of the appeal of baseball games in Durham and Davenport, it seems to me, involves the picturesque setting, the promotions, gimmicks, and  tasty ballpark food.

I don’t know much about baseball, but a perfect summer evening to me, is walking from a downtown restaurant or piano bar to Modern Woodman Park. Taking in a game in the twilight, with the lights of  Centennial Bridge’s span in the background can’t be beat.

The Bull Durham stars,  Kevin Costner, Susan Sarandon and a very young Tim Robbins, were perfectly cast, as well as the rest of the ball players, coaches and managers.

Costner plays a thinking person’s athlete in a baseball film that drops names like Edith Piaf, Susan Sontag and Walt Whitman as readily as Joe DiMaggio and Ernie Banks.  Sarandon’s Annie Savoy is not only an English teacher, but a expert in baseball history and strategy in a movie that can be enjoyed on many levels.