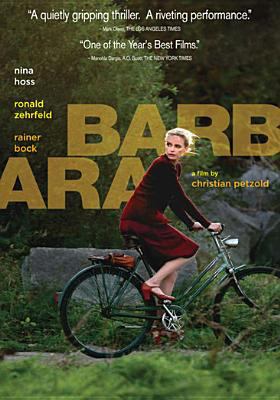 Barbara, a German language film, subtitled in English, is a fascinating glimpse into the Cold War. Nina Hoss plays Barbara, a doctor who has been exiled to rural East Germany from Berlin for reasons that are not clear. That is a theme of the film – the viewer is not sure what Barbara did or is doing now that is subversive, but we know that she is now secretly working against the government. She is suddenly, and seemingly randomly harassed. She suffers these indignities with a stoicism that is, ironically, nakedly apparent on her expressive face.

Unsurprisingly, she holds herself aloof and apart from the other staff – in particular, Andre, another doctor. The dialogue between these two, and others, is minimal and subdued – much of the power of the film lies in the close-ups of these two characters faces.  Even though it is suffused with paranoia, the film is beautiful and evocative of a simpler and less-technological time.

A mixture of the political and the romantic, this is primarily the portrait of a particular woman who maintains her dignity and integrity during a time when trust was not given easily or thoughtlessly. And when real emotion breaks out, it is all the more powerful for having been restrained.