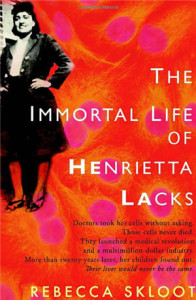 Just in time for Banned Books Week, a challenge has been filed in the Knox County (Tenn.) School District against the New York Times bestseller “The Immortal Life of Henrietta Lacks” by Rebecca Skloot.

Published in 2010, the book is medical biography that explores issues of medical ethics, race, poverty, and health care inequality. In 1951, 31-year-old Henrietta Lacks underwent treatment for cervical cancer at Johns Hopkins University. While she would die from the disease, her tissue samples – taken without her knowledge or consent – would be used to create HeLa, an “immortal” cell line. HeLa was sold around the world, and was critical to many medical developments from the polio vaccine to AIDS treatments. Despite this, Lacks’ family never learned of use of HeLa until more than twenty years after her death, when scientists began using her husband and children in research without informed consent.

The book intertwines Lacks’ life with larger issues of human medical experimentation, in particular on African-American patients, and the heartbreaking loss of a young mother of five. The book also addresses issues of violence and infidelity, the description of which a parent of a 15-year-old student assigned to read the book over summer break objected to. Also at issue was the description of Lacks’ intimate discovery of a lump on her cervix. Claiming that the book was inappropriate for teens, the parent stated, “I consider the book pornographic,” she said, adding that it was the wording used that was the most objectionable. “It could be told in a different way,” she said. “There’s so many ways to say things without being that graphic in nature, and that’s the problem I have with this book.” The author, Rebecca Skloot, who worked for 10 years on the book alongside Henrietta’s daughter, stated on her Facebook page:

“… A parent in Tennessee has confused gynecology with pornography … I hope the students of Knoxville will be able to continue to learn about Henrietta and the important lessons her story can teach them. Because my book is many things: It’s a story of race and medicine, bioethics, science illiteracy, the importance of education and equality and science and so much more. But it is not anything resembling pornography.”

The student, who had  been assigned the book as part of his school’s STEM (Science Technology Engineering Mathematics) program was given a different books to read. However, the parent is still pushing to have the book removed from the curriculum district-wide. Other parents have taken issue with the attempt to remove the book, saying that banning the book would deprive their children of the opportunity to learn about important science and social issues. Doug Harris, Knox County Schools Board of Education chair stated, “Always, good people can disagree,” Harris said, “and I think on this book that’s probably the case.”

Bad Behavior has blocked 1417 access attempts in the last 7 days.