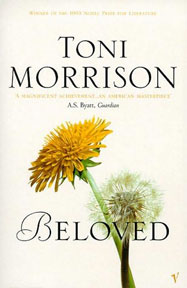 In honor of Banned Books Week, which lasts until October sixth, I’m revisiting my favorite banned book: Beloved by Toni Morrison. I first read this masterpiece in a high school English course; it’s dense and lyrical and moving. The story is based on a real-life tragedy: an escaped slave woman who murdered her own children to stop her owner from recapturing them. That woman is Sethe, and her life story is one of mingled despair and hope, tragedy and good luck. The narrative is touched by the supernatural: the spirit of Sethe’s murdered baby, whose headstone only reads Beloved, has haunted her house ever since her death. 20 years later, when a pretty 20 year old girl turns up on Sethe’s front step knowing things only a family member could know, it’s unclear what her intentions and her identity really are.

Sethe’s story is magical and moving. It’s been banned or challenged for containing offensive language, explicit sexuality, and being “unsuited to age group,” according to the American Library Association’s list of banned and challenged books. When I read this novel as a teenager, I wasn’t scarred, offended, or damaged: Morrison’s book was, instead, eye-opening and moving. It made me more interested in literature and in history, and it gave my class fodder for discussions that improved our understanding of reading and the way it impacts real life. I hope you’ll check it out: you won’t be disappointed.