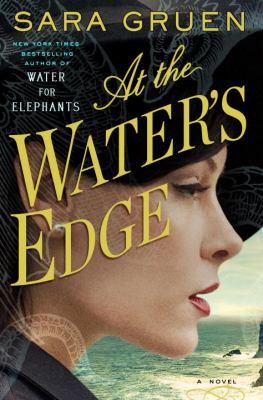 At the Water’s Edge is a glorious novel written by Sara Gruen, the author of Water for Elephants. Written in the same rich, historical style, At the Water’s Edge follows the life of Maddie and Ellis Hyde, as well as their friend Hank. Maddie, Ellis, and Hank have always been friends. They’re wealthy, beautiful, and carefree. Well, until all three go and muck their lives up royally of course. At a major high society event in Philadelphia on New Year’s Eve of 1942, Maddie, Ellis, and Hank get together and have a rolling good time. Maddie thinks nothing happened out of sorts until the following morning when countless people call her mother-in-law’s house where she and Ellis are staying to tell her about the major embarrassment that Maddie, Ellis, and Hank caused. Devastating repercussions follow and Maddie and Ellis soon find themselves cut-off financially with no clue what to do. Enter in Hank with a master plan!

Hank proposes they head to Scotland in the middle of the war to look for the Loch Ness monster. This trip had always been thrown around as a somewhat joke given Ellis’ father’s infamous dealings with the monster, but given the fact that Maddie and Ellis have no money, it is their only option. Finding that monster will get all three back to the lifestyle that they are so accustomed to, as well as clear Ellis’ father’s name. Plus Hank is massively wealthy, so he’s going to bankroll it! Even better. Once decided, all three head off to Scotland in the middle of the war. Seemingly oblivious to the war and how it is affecting the city and the people they deal with every day, Hank and Ellis hunt the monster, leaving Maddie behind most everyday at their hotel to deal with everything. Left alone, Maddie is forced to confront some uncomfortable truths about herself, her companions, and her way of life. Add in the fact that both Ellis and Hank both seem to be able-bodied men who are avoiding the war to hunt for a fictitious monster and this book is rife with conflict.

What I most enjoyed about this book was that readers can clearly see Maddie’s character develop into something more well-rounded as the book progresses. As soon as she leaves Philadelphia, she seems to awaken out of her privileged state where everything is glossy and perfect to see all the harsh realities that surround her. Maddie also starts connecting to more meaningful things, be they people, nature, or life in general, than she had previously in Philadelphia. Maddie’s metamorphosis hooked me into the book and kept me reading.

I listened to this book through OverDrive and greatly enjoyed it. The narrator did a fantastic job of giving each character their own separate voice. Given that the majority of this book takes place in a foreign country and also during war time, she was also able to give the necessary characters a very believable foreign accent.