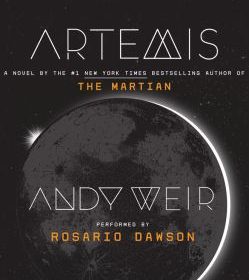 Artemis is the second Sci-Fi novel written by Andy Weir. I loved Weir’s first book, The Martian, and also the movie based on it, even though I am not typically a Sci-Fi reader. I thought it was smart and funny, with just the right amount of suspense. That is just how I like my books. Therefore, I was eager to read Artemis. I checked out the audiobook version, read by Rosario Dawson (she’s great!).

The main thing Artemis had in common with The Martian is that the characters are living somewhere other than Earth. Beyond that, they are very different. Artemis is still smartly written, but I didn’t find it quite as funny. Artemis is grittier.

In The Martian, an astronaut named Mark struggles to survive alone on the red planet after a mishap leaves him accidentally abandoned by his research team. I know, it doesn’t sound funny at all. But Mark is a character with a very good sense of humor, despite his dire situation. I rooted for him the entire time. By contrast, Artemis is a futuristic moon colony populated by many humans (some live there, others are just visiting). Artemis’ protagonist, Jasmine, is a young, jaded crook. She starts out as a petty smuggler, but things escalate, intensely and quickly.  Maybe other readers would feel differently, but I kept hoping that she would get busted for her antics. Still, every misstep she takes is entertaining.

A self-described “space nerd,” Weir describes the scientific principles of living in outer space in a way that is pretty easy for a novice to grasp. I’m no expert, but it sure seems like he knows what he’s writing about. I recently read the Moon Base Alpha series by Stuart Gibbs with my 10 year old son, and many things are echoed in those books. For example, EVA (Extravehicular Activity) suits are described almost exactly the same in both books, by the two different authors.

I have since started reading Kurt Vonnegut’s The Sirens of Titan. It is rather amusing to see how Sci-Fi writing has changed over the years. Who knows? This may compel me to read more Sci-Fi / Fantasy as time goes on .