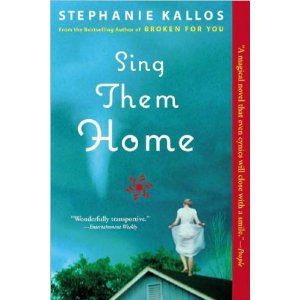 The Iowa Library Association has announced the All Iowa Reads title for 2011 – it’s  Sing Them Home by Stephanie Kallos. Be sure to watch the Davenport Public Library newsletter for the announcement of programs and discussions of this book throughout the year.

In 1978, Hope Jones, mother of three, is swept away during a tornado. Her body is never found. Twenty-five years later her children – Larkin, Gaelan and Bonnie – still struggle to understand their loss and to find their place in the world. The sudden death of their father brings them all home again, forcing them to come to terms with their history and each other.

Set on the open plains of southwest Nebraska, the writing and atmosphere evoke the rural Midwest effortlessly – open skies, violent weather, the restrictions and freedoms of small towns. This is a complex story of grief, love and healing with touches of magical realism and characters that you come to care about.

Bad Behavior has blocked 1404 access attempts in the last 7 days.