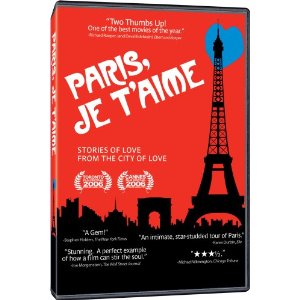 Twenty notable directors collaborated on a wonderful movie that gives a great sense of the French capital, Paris, Je T’Aime, which celebrates Paris and Parisian life in eighteen short films.  Each film is located in a different neighborhood of the city so it gives the viewer a sense of life and love in the “City of Lights.” The films are very similar in that they each contain the same theme of love and explore the cosmopolitan feel of Paris, its residents and the tourists who fill the city.  Each film ends where the other begins and that gives the entire film a sense of continuity. In the chance that you don’t like the current selection all you have to do is wait 5 minutes for the next film.

2 thoughts on “A Summer Trip to Paris Without Leaving Home!”