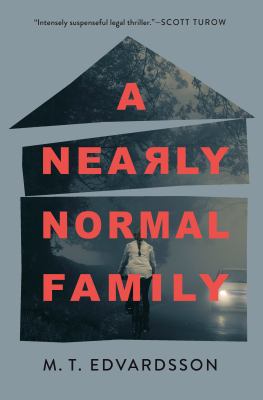 I have been slowly making my way through books recommended to me by other librarians. A Nearly Normal Family by M.T. Edvardsson was my latest recommended read  and it blew me away. This is a Swedish thriller translated by Rachel Willson-Broyles. This Scandinavian crime novel had me buzzing as I tried to figure out what was going on. Trying to categorize this book is difficult, but I would describe it as a mix between courtroom drama/legal thriller and family drama/domestic suspense. Let’s get into it!

Edvardsson has crafted a new buzzy novel that tells the story of eighteen-year-old Stella Sandell and her family. Stella is accused of the brutal and horrific murder of a shady businessman almost fifteen years older than her. Her family can’t believe she actually did this. Her father is a priest while her mother is a criminal defense family. Stella is an ordinary teenager with normal teenage problems who grew up in a honorable and honest local family. Her being accused of murder throws the whole family and surrounding community into massive confusion.

Why would Stella have killed him? How did she even know him? The victim was the son of a well-known woman in the community which throws another layer of tension into the whole situation. As the investigation progresses, Stella’s parents quickly find their morals tested as they continue to protest to all who will listen that their daughter is innocent. Understanding why and how she could be considered a suspect is difficult for them to come to terms with.

This book handles complex topics and is told from three different perspectives, making it an unusual read that gives you multiple viewpoints and background stories surrounding the same event. By seeing those different perspectives, readers see how each character deals with questions of how well you really know other people and how far you are willing to go to protect them.

Bad Behavior has blocked 1382 access attempts in the last 7 days.