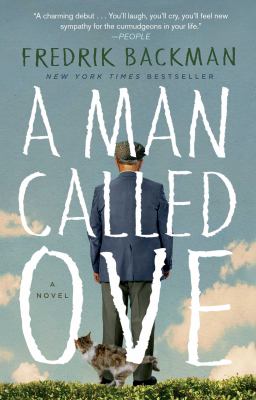 Ove, to put it kindly, is a curmudgeon. All of his neighbors are ninnies and no one knows how to do things properly. He has had a long-running feud with his former best friend and next-door neighbor Rune over a disagreement (fight) that ended with Ove being forced to step down (coup d’etat) as chairman of the Residents Association. He follows a rigid routine through his day, inspecting the neighborhood for trash, bicycles parked illegally and rule-breakers, all the while muttering about the people who drive BMWs (instead of Saabs) and nobody knowing how to bleed a radiator anymore.

That routine is severely disrupted when new neighbors move in and back their trailer into his mailbox (honestly, doesn’t anyone know how to back a trailer properly?). Ove has important business planned for that day, but now he must show the new neighbor (Lanky One) and his wife (Pregnant One) the correct way to do things and his plans are ruined. Every day he attempts to finish his plan, but time and again something comes up and interrupts him, mostly because of other people’s incompetence. No one seems to know how to repair a bicycle, or open a stuck window, or how to drive a stick shift car (Ove despairs for the future of mankind) His new neighbors persist in being his friends and, although he does all in his curmudgeon-y power to discourage them, he attracts a circle of friends and loyal supporters. And a scruffy street cat.

At first I didn’t like Ove. At all. But as the story unfolds and we learn more about Ove and his life it is easier to empathize with him. Life has sent Ove some tough blows and gradually it becomes evident that his grumpiness protects a kind and caring person. Also, most of Ove’s rants are quite funny (Ove wonders why a tattooed man let someone “doodle on him”) and his opinions are often spot-on. He may occasionally use politically incorrect terms (to everyone’s consternation) but he is fair to all and will fight any injustice against you, large or small.

A Man Called Ove is a charming, funny (more than one person asked me what I was reading because I couldn’t help laughing out loud), heartfelt book about looking past the surface and giving people a chance. Highly recommended.