Farmer’s Market season is upon us! Despite the flood, The Davenport Freight House Farmer’s Market will be open bright and early Saturday morning. Check out the Radish for a comprehensive list of all the area markets. Besides the great produce, there well be other fun events in which to partake while shopping. The Davenport Public Library will be there for storytelling on the third Wednesday of each month. Cooking demonstrations are scheduled later in the season. Support our local farmers and feel good about helping to reduce the amount of fossil fuel 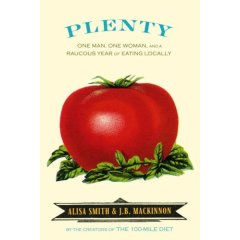 it takes to get produce from field to fork. Here are a couple of books that helped inspire me to be a locavore.

In Plenty: One Man, One Woman, and a Raucous Year of Eating Locally, a Vancouver couple recount their experiment of living on a diet of foods grown within 100 miles of their home. They went so far as to not use salt or oil since these staples were not locally produced. They also experience the joys of growing some of their own food as well as getting to know local producers of the items they purchase. The authors learn a lot about nutrition, uncommon varieties of fruits, vegetables and herbs, as well as share their experiences in canning tomatoes and making jam. While not everyone will want to take such a radical approach to being a locavore, this book offers an eye-opening account of what it means to step outside 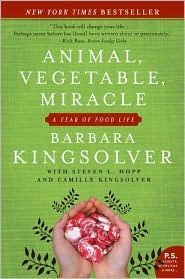 of the industrial food system.

Well known novelist, Barbara Kingsolver also took a year to drop out of the industrial food pipeline. In Animal, Vegetable, Miracle: A Year of Food Life, she chronicles her family’s move to rural Virginia where they vow to buy only food raised in their own neighborhood, grow it themselves, or learn to live without it. The Kingsolver’s plant a huge garden and spend considerable time making pickles, canning tomatoes, and even making mozzarella. They even abandon their previous vegetarian ways and discover the pleasures of conscientious carnivory as they raise chickens and turkeys.

4 thoughts on “Let the Shopping Begin!”

Bad Behavior has blocked 1550 access attempts in the last 7 days.