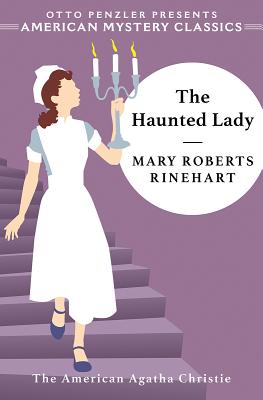 The Haunted Lady  by Mary Roberts Rinehart is enjoying a new rebirth thanks to Otto Penzler and his American Mystery Classics series.  Originally published in 1942, The Haunted Lady is one of a handful of reprinted mysteries hand selected by Penzler for a new generation of mystery readers.  Even though the American Mystery Classic series includes a multitude of vintage authors, the reissued titles have a common theme in their beautifully modern covers that give the books a uniform look and feel.  The cover of The Haunted Lady is exactly what drew me to the book in the first place.  Known as “the American Agatha Christie”, Rinehart apparently lost popularity after her death in the 1950s.  Penzler provides a short history of the author’s work at the beginning of the book.  Featuring nurse Hilda Adams, The Haunted Lady is one of three books featuring Adams.  Even though this book is the second in the series, picking up the book without reading the first in the series was seamless.

When we meet Hilda Adams, she has been recruited by Inspector Fuller to insert herself into the wealthy Fairbanks household to look after the elderly matriarch Eliza Fairbanks. Mrs. Fairbanks is convinced someone in her household is trying to kill her by initially feeding her arsenic and then by driving her mad with loose bats in her bedroom.  Nurse Adams charge is to keep an eye on Mrs. Fairbanks and report back to Inspector Fuller.  She meets a cast of characters in the Fairbanks family, and almost immediately more odd occurrences happen.   After a murder is committed in a seemingly locked room under Nurse Adams watch, she and Inspector Fuller team up to uncover the baffling truth.

For fans of early 20th century mysteries and cozy mysteries, I recommend The Haunted Lady as well as other novels in the American Mystery Classics series.  At the time, Mary Roberts Rinehart was  a very popular mystery writer and although not well know today, her mysteries still hold the reader’s attention and keep them guessing as to the culprit.  This series reintroduces vintage authors to an entirely new set of readers in today’s world.

Bad Behavior has blocked 1367 access attempts in the last 7 days.