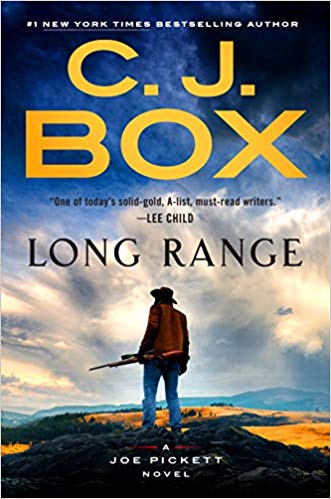 Have you ever found a book series that was so immersive that when you finished one book, you immediately picked up the next in the series? Sometimes there’s a cliffhanger that needs resolution or you’ve become so invested in the characters you don’t want to let go. The Lord of the Ring series by J.R.R. Tolkien or the Outlander series by Diana Gabaldon are good examples. For me it’s always been the Master and Commander series by Patrick O’Brian (and omg, don’t get me started on these books – I’ll talk your ear off!) Now I’ve added another to my favorites – the Joe Pickett series by C. J. Box.

Joe Picket is a game warden in the Bighorn Mountains of Wyoming. He keeps an eye on the wildlife and makes sure hunting and fishing are done legally. He often teams up with his friend Nate Romanaski, a falconer who sometimes tiptoes the legal line. In Long Range, Joe is drawn into the investigation of a case where a local woman has been shot from a very long distance, a shot that would require specialized equipment and a particular set of skills. The woman is active in the community and liked by everyone, but her husband is a controversial local judge and has made more than one enemy. Was this a case of the wrong person being shot? If so, was the shooter going to try again? And who would have the skill and knowledge to make that kind of shot?

Because of Joe’s knowledge of the area and the locals, he is put on the sheriff’s task force. When Nate is falsely accused and arrested, Joe’s task becomes two-fold – finding the murderer and clearing his friend.

Long Range is number 20 in this series (I read the first 19 in the series last fall – I warned you, they’re addictive!) and the quality shows no signs of declining. The mystery is tight and suspenseful, the writing is sharp, crisp and evocative and the characters are multi-layered and interesting. Box touches on a wide range of topics from falconry, to marksmanship to environmental protection and responsibility. The rugged scenery of Wyoming serves as a stunning backdrop and Joe’s unwavering love of his family, loyalty to his friends and his unbending moral code act as the center of this series. Highly recommended.