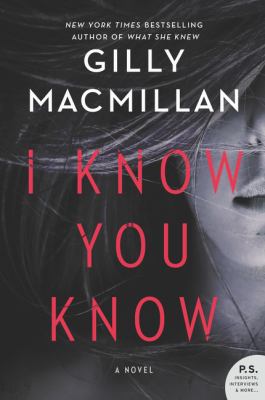 Gilly MacMillan released her first book, What She Knew, in 2015. I have been a fan of her books as she writes thrilling psychological suspense. I read a lot of books in this genre, so I know that although many people write thrillers, it takes a lot for them to succeed in crafting a story where readers do not guess the ending. MacMillan’s 2018 release I Know You Know ended with a twist that I didn’t see coming.

I Know You Know is the story of the murders of Charlie Paige and Scott Ashby that happened twenty years ago. The city of Bristol was rocked by the murders of those two young boys whose bodies were dumped and subsequently discovered near a dog racing track in town. Police believed that they found the man responsible and successfully convicted him, but years later, residents around town still have questions that have never been answered.

Cody Swift was best friends with young Charlie and Scott all those years ago. He isn’t satisfied with the conclusion that the police came to and decided to head back to his hometown of Bristol to seek out the truth himself. Cody is planning to record his findings and release them on his new podcast, Time to Tell.

At present at a construction site near where the boys were discovered twenty years ago, human remains have been found. DI John Fletcher, one of the police who found the boys, is left to wonder if the remains found have any connection to what happened to the boys.

Charlie’s mother Jessica Page is not thrilled that Cody is back in town poking through old wounds. The remains just found are also bringing the police back to her door. Jessie has secrets that she would like to stay hidden, but Cody seems determined to shed light all over her past. Jessie isn’t the broken woman that she was all those years ago. She is now married with a 16-year-old daughter and has no desire to relive that trauma from so long ago.

This novel transitions back and forth between both investigations: the original about the boys and the new one focusing on the recently discovered remains along with the possible connection to the boys. While I enjoyed the back and forth between the two as well as the addition of the podcast format, I did have trouble differentiating between the past and the present while listening to the audiobook. The print version highlights the parts about the old case, but that did not translate to the audio, and as a result it was sometimes difficult to tell when something happened. I adjusted to this issue and was able to finish the book, but be aware if you decide to give this a listen!