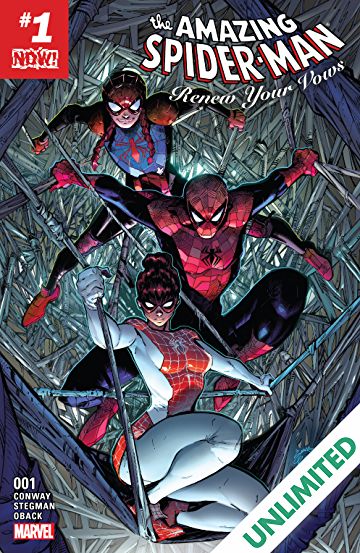 Spider-Man has gone through a lot of changes during his over-50 year run. Peter Parker has graduated high school, college, gotten married, lost his powers, got them back again, then lost them again. There was even a time where we thought he would have a child. But then it was decided that an adult family-man Spider-Man went against what Spider-Man was all about so they reverted Peter Parker back to being a 20-something and got rid of the character of Mary Jane Watson all together. This story The Amazing Spider-Man: Renew Your Vows is a big What If story about what would have happened if Peter wasn’t reverted back to being a 20-something, was still married to Mary Jane and they had a child together.

This run of comics highlights everything that makes Spider-Man such an endearing and long-lasting character. Peter Parker isn’t just a guy that has an insane sense of responsibility that dresses up as a spider and beats up bag guys, he is also a person with real-life issues. Renew Your Vows is also about living life as a lower middle class family in a big city. While half of the book involves the spider family beating up bad guys, the other half focuses on them dealing with real life struggles such as Mary Jane’s small business and Peter trying to make ends meet with his photography job all while they are both trying to raise their daughter Annie (who also happens to have super powers).

Using tech scavenged from when Peter fought a previous big bad guy, he was able to make a suit that shares his super powers with Mary Jane so that she can help crime fight with her husband and daughter, it has a very Incredibles-esque dynamic of a family fighting bad guys together. There are some very interesting conflicts that Peter has to wrestle with that most parents will also find themselves reflecting on. It is ok to let your children fail and get hurt because it is how they learn. This message is one that Peter has an extra hard time with because he wants to protect his family but he also has to let them fend for themselves and be independent. The conflicts and themes are effectively woven between the bad guy fight scenes and the scenes when the characters aren’t wearing their super suits.

I recommend The Amazing Spider-Man: Renew Your Vows to anyone that has wished for a married Peter Parker to return to comics, or anyone that thinks the idea of The Incredibles-meets-Spider-Man sounds like a really fun read. It is well-written and a lot of fun for comic book readers of all ages.