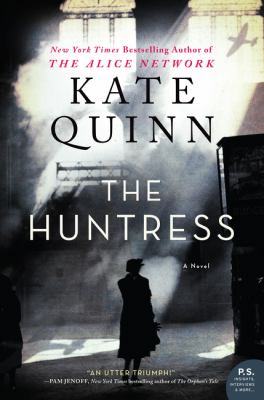 In the chaotic aftermath of World War II three very different lives intersect as they all seek one goal – to find and bring a cold-blooded killer to justice in The Huntress by Kate Quinn.

Ian, a newspaperman who went into battle alongside the soldiers he reported on, can no longer find it in him to write. He now hunts down former Nazi’s that have slipped away, bringing them to trial to answer for their crimes. Nina, raised in Siberia to be tough and unforgiving, fought in the war as a bomber pilot for the Soviet Union. When her father is disavowed by the Soviet government, Nina is considered guilty by association and, despite the fact that she has served loyally she must flee, past the front lines into German-held territory where she barely survives. And Jordan, safely tucked away in America slowly realizes that the war has come to her, years after it officially ends.

This is one of those can’t-put-down books not just for the twists and turns and tension (which there is plenty of) but to find out more about the characters and their lives. Nina is especially interesting – her (very harsh) childhood in Siberia, her training to be a pilot and her exploits in the Soviet Army as a bomber pilot (the Soviet Union was the only country to use women in combat roles in World War II) as part of the all-female 588th Night Bomber Regiment nicknamed the “Night Witches” by the Germans. The blending of Nina’s fictional story and the true exploits of the Night Witches is fascinating and introduced me to a little-known part of the war.

Ian is also an interesting character. He is obviously suffering from PTSD brought on by some of the horrors of war he has witnessed when following soldiers into battle armed only with a notebook. He now channels his guilt and energy into tracking down former Nazi’s that have escaped notice in the chaos at the end of the war. Many of them fled to other countries, changing their names and trying to hide among ordinary people. Many countries, including the United States, turned a blind eye and a war-weary world chose to move on. Ian has not forgotten though and goes after these minor Nazi’s with dogged determination.

Jordan may seem the least touched by the war but in the end it is she that brushes up against it’s brutality most intimately. Her suspicions of her new stepmother only grow as time passes and she is thrust into a race to save the people she loves. It is “The Huntress” herself that ties these people together and when their stories finally intersect, the result is explosive.