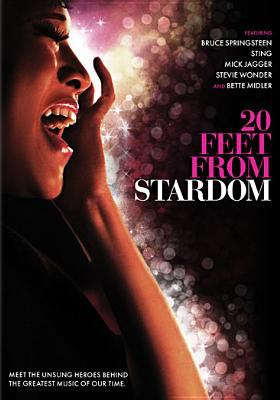 Before I watched 20 Feet From Stardom I never realized how heavily my favorite music relied on the talents of the unsung heroes (pun intended): background singers. As a child, I would sometimes joke that I wanted to be a background singer. I’d dress up and stand in the living room, swaying and ooohing. I thought it was funny because… who wants to be in the background when you could be in the limelight? Turns out, plenty of people.

Darlene Love, Merry Clayton, Lisa Fischer, Judith Hill, Tata Vega…these are just a few of the names belonging to people so talented they could easily carry the stage on their own. But for varied reasons, each as unique as the individuals themselves, they remain mostly anonymous background singers. To be sure, some of them would love a successful solo career, and have tried to reach that goal… to no avail. Others have been content to leave the spotlight and all the complications that go with it to the names we recognize so well: The Rolling Stones, Bruce Springsteen, Bette Midler, Michael Jackson, Stevie Wonder, Sheryl Crow, David Bowie…the list goes on.

20 Feet From Stardom takes us behind the scenes where the singers share, in their own words, what a career as a professional background singer has been like for them. It is as emotional as it is funky and upbeat. As soon as I finished watching, I promptly looked up their names in the library catalog and put holds on as many albums featuring their vocal talents as possible.

I think any of us would be hard pressed to come up with a Top Ten list of our favorite songs of all-time that did not include a contribution from of one of these fabulous singers.  That’s what makes it so unbelievable that they are not household names. I challenge you to watch 20 Feet From Stardom and not come away with a song in your head!