The wedding of Helen Kohn and David Gottlieb

Helen Josephine Kohn of Davenport married David Sticker Gottlieb of Tiffin, Ohio, on April 7, 1913, at the Outing Club in Davenport.

According to the next day’s Davenport Democrat, the wedding was lovely.

The Outing Club Ballroom was decorated with roses, streamers and ribbons, and the couple was united in the Wicker Parlor underneath a traditional huppah by Rabbi A.L. Weinstein of Temple Emmanuel, to music from the Criterion Orchestra. 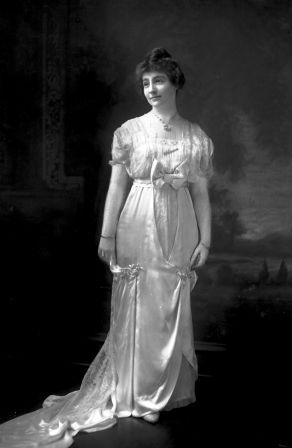 “The bride was dressed in a wedding gown of white chameuse, made entraine and draped in white chantilly lace.  Her veil, which had been worn by her mother at her wedding, was fashioned into a Juliet cap, caught with orange blossoms, while her only ornament was a diamond la valliere, the gift of the groom.  The bridal bouquet was in nuptial arrangement of lillies of the valley with true love-knots and bows.”

The paper went on to note that the ring bearer, a very young Philip David Adler,* carried the rings in a white tulip.

Afterwards, the orchestra played at the informal reception as the wedding party and fifty-five of their immediate relatives had a wedding supper in the Outing Club’s dining hall.

After a week-long wedding trip, the newly married couple set up household in Ohio, where the groom ran a manufacturing plant.

*Philip D. Adler would later become a journalist and a European news correspondent, before stepping into his father’s shoes as the president of the Iowa-based Lee Enterprises newspaper syndicate, which would eventually purchase the newspaper in which this marriage announcement was published.  We’re almost certain that has nothing to do with the remembered ignominy of the tulip.