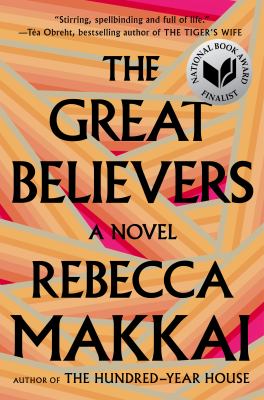 Rebecca Makkai’s latest novel, The Great Believers  is one the New York Time’s 10 Best Books of 2018. Recently, I heard speak Makkai when she gave a reading at Prairie Lights bookstore in Iowa City.

Her novel explores a time in Chicago’s history that is little documented, according to the author.  A native of Chicago, she spoke of the difficulty of finding primary and secondary sources about the AIDS crisis in her hometown. New York and San Francisco were much more likely to be  the subjects and settings of the print and film record of the time. So, of necessity,  she ended up interviewing survivors, healthcare workers, caregivers, residents of Boystown, as well as doing other research for several years. She attributes the emotional resonance of the book to the fact that she was forced to seek out and talk to people, getting the telling detail and anecdote, rather than just reading about the crisis.

The book’s thread is Fiona, the sister of an early victim of AIDS – before it even had a name. As a young girl, she appears in both the eighties portion of the book as well as the sections dealing with the more immediate past. These chapters are set in 2015 when Fiona goes to Paris to try to connect with an estranged daughter, now involved in a cult. Makkai weaves Fiona through the lives of the principal characters of the book; for example, when she’s in Paris, Fiona stays with a now-famous photographer who chronicled the early days of the AIDS epidemic.

I found the chapters set in the eighties by far the most compelling. The main character here is Yale Tishman, who is a development director for an art gallery. His personal story is shadowed by  the fear he feels about every cough or fever – every possible sign of illness.  He and his friends try to deal with the mysterious and little understood disease in different ways. Told from Yale’s point of view, you get a small inkling of the paranoia and confusion of the time.

Because Yale is involved in obtaining an art collection owned by an expat living in  Paris of the twenties, the novel finds parallels with that time and place. The book’s title refers to a line by F. Scott Fitzgerald about the generation that was decimated by World War I and the flu epidemic that followed. After this time period, artists and others who didn’t necessarily fit into mainstream society gravitated to Paris of the twenties:  “We were the great believers. I have never cared for any men as much as for these who felt the first springs when I did, and saw death ahead, and were reprieved—and who now walk the long stormy summer.” – F. Scott Fitzgerald, “My Generation”

Bad Behavior has blocked 1393 access attempts in the last 7 days.