Here’s Tana’s gruesome entry for Horror Week at Davenport Library. Read it if you dare! 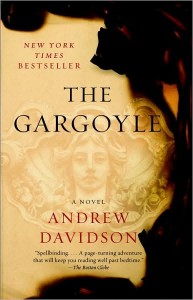 The Washington Post describes The Gargoyle “as engrossing as it is gruesome, the kind of horror you watch with one eye closed.”  Truly, the opening scene is horrifying — we witness the unnamed narrator being burned alive.  Perhaps even worse, we then watch him endure seemingly endless and excruciating treatments for these burns, treatments so painful that he anxiously awaits his  release from the hospital just so he can finally commit suicide.   It should be noted that the narrator is no angel — he’s a coke-addicted pornographer, a cynical character most would consider undeserving of redemption.  Yet redemption he receives.  It comes in the form of visits from a beautiful sculptor, Marianne Engel, who specializes in sculpting gargoyles.  The only problem is that Marianne is a fellow patient, a schizophrenic from the pysch ward.   She regales him with stories of their love affair — an affair that supposedly took place over 700 years ago in Germany, when she was serving as a scribe in the monastery of Engelthal and he was a wounded mercenary.

As Marianne continues to visit, she shares other tales of deathless love from other countries (Japan, Iceland, Italy) and she earns the trust of both the patient and the hospital staff.  It is into her care that he is released. Still, all is not well.  Marianne begins a frenzy of work on her final 27 sculptures and the narrator deepens his dependence on morphine.  To break his addiction, he literally goes to Hell — here the author leans heavily on allegories from Dante’s Inferno.

Fantastic fiction?  Perhaps.  Still, a definite page-turner — as long as you can keep one eye open.