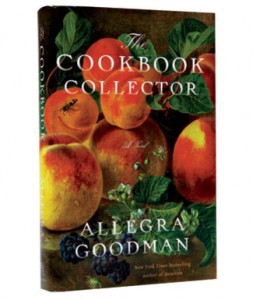 The title of The Cookbook Collector by Allegra Goodman is indicative of the book’s style. The cookbooks in question aren’t introduced until well into the story, and is just one of several plotlines. The book has been compared to Jane Austen’s Sense and Sensibility but I get a Dicken’s vibe, myself. There is an abundance of characters; many of them quite eccentric. There is also a sense that, in this book and for these characters, morality is an actual consideration in how they conduct themselves and the choices they make.

Two sisters are contrasts in lifestyle and general philosophy. Jess, the younger sister, is a free spirit, environmentalist, and perennial student.  Emily is the CEO of a computer startup company (this being the late ’90’s and San Francisco).

Romantic tension abounds between Jess and her boss, the owner of a used and rare book store; they argue about everything –  books, authors and whether books should be collected and owned or shared (via the public library system!). The dialogue between these two is witty and erudite, but not pompous.

Book lovers, library users and patrons of book stores, will all find something in The Cookbook Collector to chew on.

Bad Behavior has blocked 1329 access attempts in the last 7 days.