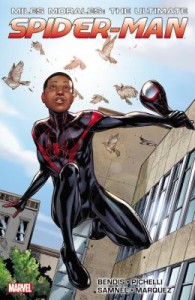 Miles Morales: The Ultimate Spider-Man is a graphic novel that introduces the world to a brand new Spider-Man. In this world, Peter Parker has been killed in a major superhero-villain brawl and everyone is left in the lurch, mourning the loss of Spider-Man, dealing with the fall-out of learning his identity, and coming to terms with the fact that they don’t have a hero anymore. Along this same storyline, runs the story of junior high student, Miles Morales, and the various happenings of him and his family.

Miles lives with his parents and has his name entered in the lottery to go to a charter school, instead of a public school. After learning his school fate, Miles heads to his Uncle Aaron’s apartment, his dad’s brother, the one person that he is constantly told to stay away from. Once there, Miles is bitten by a spider with a number written on its back, a spider that escaped from Norman Osborn’s laboratory in Uncle Aaron’s bag while he was robbing the place. Everything seems normal until Miles runs out of the apartment and discovers that he can turn invisible. With that one discovery, his life is turned completely upside-down.

With his roommate, Ganke, being the only person who knows he has spider-like powers, Miles wrestles with what to do. Was he given these powers for a reason? Should he become a new Spider-man since the old one is deceased? What will his dad, a vocal non-supporter of any kind of mutant activity, think of him? How will he balance fighting crime and being a normal every-day junior high student? These questions and more are answered in this collection as Miles begins to fight crime, is introduced to Nick Fury and various members of the Avengers, and as he struggles to deal with balancing family, school, and his brand new superhero life. The author has added in some twists that are guaranteed to make you question everything that you think you’ve learned about the old Spider-Man and the new Spider-Man.