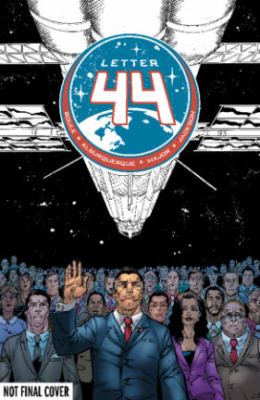 What would you do if you were thrust into a situation that you initially thought you could control, but then you found out that everyone who had prepared you had either lied to you or had been unaware of a certain MAJOR event? Would you panic? Would you want to tell everyone about the secret you just learned about? This is the predicament that newly-elected President Stephen Blades finds himself in on his very first day in office in Letter 44, Volume 1: Escape Velocity.

In this first volume, President Blades is ushered into the oval office to find a letter for him from the previous President. Opening the letter and expecting to have to dive headfirst into fixing the critical issues facing the nation caused by President Carroll, Blades instead discovers the one singular event and reason behind the country’s involvement in two major wars, the economy collapsing, and the healthcare system to be failing. It’s a national and world secret that only a handful of people are aware of: seven years ago, NASA discovered an alien presence in the asteroid belt between Mars and Jupiter, one that was able to cloak itself somehow and had the potential to be dangerous. In order to learn more about this, a team of 9 astronauts made up of both military members and scientists was sent into space to discover what is really going on.

This graphic novel divides focus between Blades and the group of astronauts who are almost to their destination. As the astronauts prepare to reach their destination, you learn their ship, the Clarke, is becoming increasingly damaged and should not have been sent on this mission so quickly. Secrets abound both in the air and on the ground, leaving readers to wonder what really is the truth and showing that President Stephen Blades has the ultimate power in his hands. All that’s left is for him to decide what to do with it.

Stay tuned for a review from Volume 2 (and be on the lookout for Volume 3)!