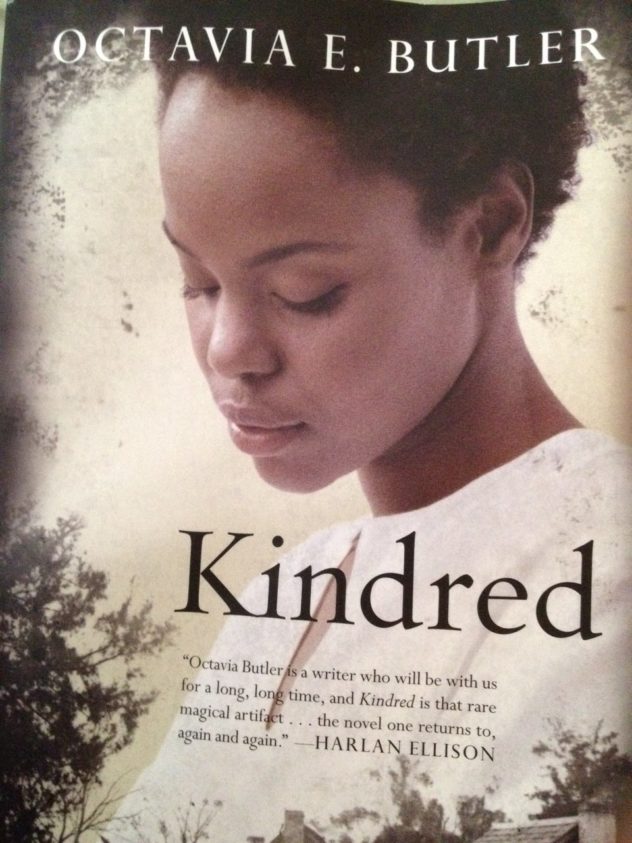 I’m blown away by the sheer density and complexity of this novel for a number of reasons, but I’d have to say Butler’s technique of “layering” is so expertly done as to require multiple readings in order to unpack the story.  In other words, reading Kindred is like cutting into an onion and peeling back layer upon layer to reveal the deep meaning within. One of the more surface-level layers is simply that Butler–the first black, female author to write a science-fiction novel–has written a book about a black, female writer who is, in essence, writing, or rather, –re-writing–history and her future.

By definition, “kindred” means to be “connected” or “related to” and maybe most obviously would connote family relationships and ties. Yet, the first mentioning of the word is a departure from that obvious definition and appears early in the book on page 57 when the main protagonist, Dana, describes her white husband, Kevin: “He was like me–a kindred spirit crazy enough to keep on trying.” The statement is both double-entendre and a foreshadowing of things to come: you must be tenacious enough to pursue the life of a writer, bold enough to disrupt the status quo, and crazy enough to keep on trying.

Dana likens the job market in 1976 Los Angeles to a “slave market”, a clear juxtaposition to the literal slave market where Dana and Kevin are mysteriously transported via time-travel. Here, in the 19th century antebellum south, Dana confronts her familial past where American slavery and the promise of freedom are as inextricably linked as black & white identities.  Will Dana’s time-travels allow her to change the course of history and influence Rufus, son of a slave owner & blood-relative of her great great grandmother, whom she is called upon to save time and again? How will Rufus and Dana embody or challenge the systems of institutionalized racism they were born into? It is absolutely remarkable how Butler masterfully stacks layer upon layer to build characters as complex and enmeshed as our troubled and not-so-distant history of slavery and racism in the United States.

Thematically, Kindred is incredibly dense and complex, but I’ll focus on the theme of “performance” or “acting one’s part” that permeates the entire novel.  In several scenes, characters must “perform” their respective “roles” unless they want to suffer the consequences of falling out of line. Time-travel itself is a brilliant way to point out how racism is a construct and not the natural order.  Should we really require the passing of time in order to recognize and challenge systems of power & oppression?

When Dana brings Kevin to the plantation with her on her second journey back through time and space (she merely has to be physically holding onto him in order to transport him with her), she assumes the role of his slave as a matter of survival.  Kevin, of course reluctant to perform his assigned role as her “owner” accepts the painful challenge in order to protect his beloved wife. That Dana even needs protecting in this way brilliantly exposes and lays bare additional gender and sexuality constructs, another way Butler will craft a specific narrative in order to question it with a critical eye. But maybe one of the not-so-obvious questions is: Who, exactly, is assigning these roles, and why, and to whose benefit?  If we ourselves do not choose the role we are expected to play or act out, what are the implications when we are complicit in carrying out the performance? If refusal to play your role could get you killed (although Dana points out that “some fates are worse than death”),what is the best method for positively effecting change? Some characters in Kindred play their parts–worn down over time and physically beaten down–while others refuse to act: one standout character, Alice, asks “Am I a slave?” and ultimately attempts to break free.

Kindred is the kind of book that will stay with you, I am of sure. The complexity and depth of characters will challenge you to step outside of your comfort zone and do something that great books make you do: contemplate, sympathize, connect. I had some powerful emotional responses while reading this book which is exactly why I would recommend it to anyone who is interested in what it means to be human.

Bad Behavior has blocked 1399 access attempts in the last 7 days.