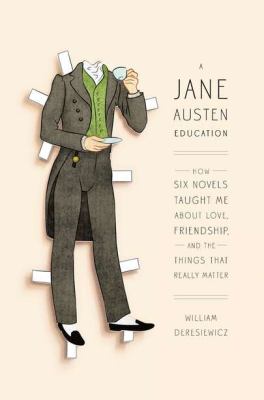 Subtitled “How Six Novels taught me love, friendship, and the things that really matter,” A Jane Austen Education is partly the story of how William Deresiewicz, now a well-regarded Austen scholar, evolved from being dismissive, to being a true fan.

There are chapters devoted to Emma, Pride and Prejudice, Sense and Sensibility, Mansfield Park, Northanger Abbey, and Persuasion. It’s a close textual study of the best kind, not overly academic and pedantic. He explains why Austen has endured. Not because of the quaint period film adaptations, but because form and style drive Austen’s message.

Long passages in Emma are devoted to trivial matters and gossip. Austen skewers the mundane conversation of characters like Miss Bates, and the cruelty of Emma. She forces readers to confront in themselves  easy and cavalier meanness.

Entwined in the literary criticism, is memoir.  Deresiewicz movingly relates how the novels changed his life for the better. Austen’s message of compassion and kindness improved his relationships.

This all sounds like it would be a tough and boring slog, but it’s actually very accessible – especially for English lit (and Austen) geeks. If you didn’t know what the big deal was before, this is an enlightening read. If you were already a devotee, you’ll enjoy it even more.